Jonathan Evison, author of 'West of Here', is this year's PNBA Award Winner. I happened upon his essay acknowledging the award and was so blown away by the pathos he captured that I contacted him to see if I could republish it for ALL 'LIT' UP. The essay originally appeared on the NORTHWEST Book Lovers website. If you're going into this weekend feeling at all frustrated by the writing life, reading Jonathan's essay should put things in perspective. Consider it a thoroughly enjoyable attitude adjustment. Enjoy - J. Goertel 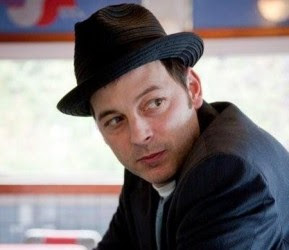 Over a twenty year period spanning my 20s and 30s, during which I cobbled together a living variously hacking up roadkill, slinging spaghetti, checking water meters, tending bar, washing dishes, working car lots, telemarketing sunglasses, and making an ass of myself on FM radio, I wrote seven unpublished novels. It’s what I did. I wrote unpublished novels. It defined me. I was not a roadkill hacker-upper, nor a spaghetti-slinger, nor a professional ass. I was a prolific author of unpublished fiction. And I was neither bitter nor particularly discouraged by this state of affairs. To write novels at all is to live the dream.

I buried three of my darlings in a trailer court that shall forever remain anonymous, and reveled in the act. I wall-papered my bathroom with form rejections. I dropped out of college, avoided career paths, essentially left myself no opportunity but to write novels—published or unpublished.

In my early 30s, hard at work on one of my beauties, I was employed at an ice cream stand, scribbling furious notes about my protagonist’s moral dilemma instead of making waffle cone batter, when the proprietor, my friend Paul, was forced to fire me. It was a relief, actually. I had a novel to finish. Eight years later, still unpublished, still broke, I was half-heartedly digging ditches in a rich lady’s yard, my mind steadily at work on my latest soon-to-be-unpublished novel, when the gardener who employed me, also a friend, was forced to let me go. My devotion to writing novels probably cost me my first marriage. It prevented me from being a homeowner, from having insurance, from being a father, from ever owning a reliable car. I was forced to wonder whether I was a disappointment to my family, whether I was a failure as an artist. As a middle-aged man I was forced to ask hundreds of sweaty and impatient tourists whether they wanted chocolate jimmies on their froyo. Why did I do it?

Surely, I don’t need to tell a bookseller that it’s not about the money, or the accolades, or the home-owning, or the insurance. But all of this still begs the question: Why do we persist with so little reason to hope? Why do we endure all the heartache and frustration, the financial duress and the existential discomfort that comprises devoting our lives to the written word—writing it, publishing it, or selling it?

And the answer is that the acts of writing and reading themselves, the practice of mining our intellectual and emotional resources, of taxing our brains and our souls, of pushing ourselves into new and uncomfortable places, of forcing ourselves to inhabit characters and endure their lots, makes us more expansive people, more understanding, thoughtful, empathetic people. Better problem solvers, better wives and husbands, better dads, and better friends. This is why we write books, and this is why we read them. Because they edify, they inform, they open the door to empathy.

Reading is, at its best, not an escape; it is genuine experience. A novel is not a monologue, but a conversation, a collaboration between writer and reader, an invaluable exchange of human conditions.

This is where you come in, indie bookseller. Thank you for your enduring energy and belief in the written word against all financial and cultural odds, for forging that priceless connection between reader and writer, one book at a time. For championing underdogs, and preaching your pets, and yes, for selling us your guilty pleasures, too. Thank you for the benefit of your good taste and expertise. And thank you most of all for making that connection human and personal, as it should be—as no search engine could ever make it.

I’m honored that you have made my West of Here one of your pets, and that you have taken it upon yourselves to build me a readership one book at a time, so that my stories may flourish in the imaginations of others instead of in a hole in my backyard. Thank you for affording me health insurance, cozy socks and keeping my refrigerator well-stocked for the first time in my life. My family thanks you. I look forward to meeting and reconnecting with you along this tour and the next and the next, so that I may thank you in person, and continue to thank you in person, for all your energy and support in making my dreams come true.
Posted by James Goertel at 4:41 AM