ALL 'LIT' UP AUTHOR ESSAY FEATURE: KENNETH RODGERS - A Hell of a Story

Ken Rodgers - poet, teacher, writer, filmmaker, and friend - dropped this week's feature essay into my email inbox over the weekend and I have had a hard time holding off posting it, trying in vain to wait for the regular Wednesday post date. But, it's just too good to wait any longer and Tuesday night seems close enough anyhow. In his essay, Ken tells just one of a multitude of stories that make up the many different facets of his life, which you can glimpse at kennethrodgers.com. For now, though, please enjoy "a hell of a story" from Ken Rodgers here at All 'LIT' UP. ~ J. Goertel 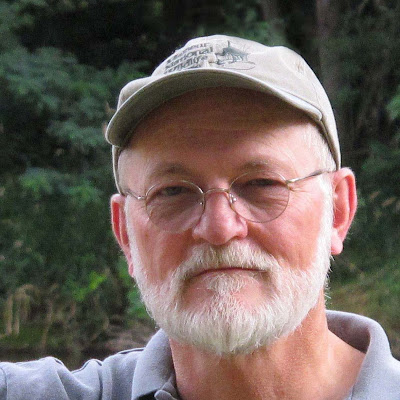 Ken Rodgers lives and writes in Boise, Idaho. His short stories and poems have appeared in a number of venues. He writes two blogs and is in the middle of creating, along with his wife, Betty, a feature length documentary film about his company of Marines at the Siege of Khe Sanh. See more about the film, Bravo! Common Men, Uncommon Valor at www.bravotheproject.com. You can find out more about Ken at www.kennethrodgers.com.

A Hell of a Story
by Ken Rodgers

I moved from one porthole to the other checking out the rough terrain as the big chopper ferried me and a bunch of body bags from Khe Sanh to Dong Ha. The chopper crew chief barked at me again and again to sit down, but I knew what happened to men who sat down in air ships. Bullets from the ground ripped through the hulls and shattered bones, blasted livers, heart, kidneys. I hot-footed here, then there, moved again and again, my heart on overdrive.

When we finally landed at Dong Ha, I exited the rear of the helicopter and stared back at Khe Sanh. After seventy-two days under siege there, I shook my head and thought, now that's one hell of a story.

In Dong Ha, and then Phu Bai, and then Danang and on to Okinawa, that thought rode me. A hell of a story. And after landing in Tucson and being picked up by my parents and my best friend and his fiancé, I couldn't wait to start telling my tale.

We went to a Mexican food restaurant and after I ordered tacos and a beer, I began to describe the raw, red-flesh metaphors of my war. As I jabbered and jumped up and gestured with my hands, I looked at them all sitting around the table digging into their green chili enchiladas and beef and bean burritos. They wouldn't look at me, or maybe they couldn't look at me.

At the time, I thought, they don't want to hear this. I remember asking myself what I'd done wrong, what we'd done wrong in Khe Sanh. Today I know that the problem wasn't me, or the war; the problem was that they couldn't understand.

Looking at my father's balding pate and my mother's fake strawberry blond hair as mariachi music played in the background, thinking what I knew about the absolute savagery that we all...we all...are capable of, and to have them not respond settled on my shoulders like a heavy coat of chain mail Norman warriors wore a thousand years before.

They don't care, I thought.

I recall going to a party in late 1968 in San Diego with a couple of Marine buddies. The party was mostly young people not associated with the military. On the way there, one of my Jarhead pals said, "Don't talk about the war, it bums people out." But I didn't pay any attention to him and marched into the crowded, smoky place with Hendrix' rendition of "All Along the Watch Tower," and the Stones screaming "Street Fighting Man," and the cheap red wine and the wide bell-bottomed trousers of the long-haired men and women, me yanking on tie-dyed sleeves begging people to listen to me about what I saw...What I Saw. But they were more interested in sex and getting loaded and talking about stopping the war and politics and sex and getting loaded.

I started keeping my story to myself. Even among my Marine Corps comrades, I kept my memories close. Once I walked into the admin office at the Marine Barracks at 32nd Street Naval Station in San Diego and saw a man who lived in the same bunker with me for two months during the siege. He looked at me, I looked at him and said, "Hello, Horne," and he said, "Hello, Rodgers," and for the next year we never said a word to each other about our common experience. I haven't seen him since.

During one fifteen-year period in the seventies and eighties, I was repeatedly told by World War II veterans things like, "You guys couldn't fight your way out of a wet paper bag." Or, "You lost the only war we've ever lost." I knew, in my war, we hadn't lost anything but our youth and in some cases limbs and lives, but how could I tell someone that? I didn't know how. The verbal spankings from a generation of warriors that I so admired for what they had accomplished at Guadalcanal and Tarawa and Iwo burned like flashes of gunpowder.

The way a story gets recorded creates the way a story is perceived. Could I tell the story so it truthfully rendered the way I remembered it? Right then, I didn't think so, so I told myself, "Shut your trap." Yet though I made both conscious and unconscious decisions to keep the story mum, my story of my war was stuffed back in my throat like a grenade and it wanted out. It wanted to explode and blow reticence to smithereens.

In the nineties I took up creative writing. First came poetry, then I wrote a novel about my war, a novel that still sits in my desk drawer, incomplete. I composed short stories and essays, some of which were published, but none of it seemed right. The story seemed unfinished, its complexities left undiscovered.

In 2009, my wife Betty and I attended a reunion of Khe Sanh Veterans in Denver and a lot of men from Bravo Company, 1st Battalion, 26th Marines—my company of Marines—attended. We sat around trading war stories, many of which I had never heard; bloody sandbags and severed limbs, defying enemy fire to carry a wounded Marine to safety , pranks around the bunkers and fighting holes, dead bodies scattered in the enemy trenches.

Betty and I discussed what we were hearing. Though the stories of war are as old as humanity, every story we heard seemed unique in such a way that you could read the memories, the experiences on each man's face. It made my heart thump and my imagination dredged up scenes of red mud, and M-16 rifles, the constant incoming that drove us all facedown into our trenches for hours, for entire nights. Each rendering of experience was unique in the way each man had responded by living the years during and between the events of the siege and the telling around those tables in Denver some forty-one years later.

While I was shooting the breeze with my old comrades, Betty went to our Skipper, the man who led Bravo Company during the siege, Lieutenant Colonel Kenneth Pipes USMC Retired, and asked him if anyone had ever told the story. When he said, "No," she asked him if we could tell it, and he gave his stamp of approval.

On the way home from Denver, Betty advised me we should make a documentary film about Bravo Company. I suspect I laughed at that. A film. I barely operate a point-and-shoot camera, but yet, the notion fetched me, and we talked and planned and dreamed and started writing synopses and treatments. If we knew what we know now, we probably wouldn't have taken on this monumental task. But what we didn't know might have been the draw, too. The unknown, the adventure of new craft, new medium, a new vehicle to tell the story that I knew needed telling since that day in Dong Ha when I looked back at the Annamite Mountains in April 1968. A hell of a story.

The Marine Corps Heritage Foundation gave us a start-up grant which was basically enough money for us to, figuratively speaking, hang ourselves, but “onward” was our motto. During 2010 we travelled from Idaho to San Antonio, Texas, back to Idaho, then on to Washington, DC, back to Idaho. We traveled by car and plane. We interviewed 15 survivors of the siege. We spent three weeks in the National Archives and at the Marine Corps base in Quantico, Virginia researching, looking for old film, photos, audio recordings, all from the winter and early spring of 1968, all from Khe Sanh. We hired a local Idaho camera operator named Mark Spear and flew him to San Antonio. We filmed interviews ourselves, we hired professionals to film interviews on our road trip. As we drove from Indiana to Springfield, Illinois, Brian Crowdson agreed to work for us for a day. In Omaha, Nebraska, Jesse Hassler shot our session. Meanwhile, the guys in the film were sending photos of themselves, of the combat base; they were sending old audio tapes actually recorded during the siege in 1968.

We had a lot of fabulous volunteer help with fundraising, with promotion. Family and friends, believers in our project, believers in us, chipped in to help fund the making of the film.

A Vietnam veteran with forty years experience in film, John Nutt, contacted Betty and me and offered to edit Bravo! He took our raw material and created art out of war and mayhem. George Lucas' Skywalker Sound graciously let us mix the film at their Marin County facility. Four-time Oscar winner Mark Berger orchestrated the final sound mix.

The movie captures history, it is a study in PTSD and psychology, it is a memoir of war, it is poetic, like rhythmic verse. It speaks on multiple levels in multiple voices. It is funny, sad, loud and profound.

And here we are in film festival mode on the brink of distribution.

The story of Bravo Company, 1st Battalion, 26th Marines has now been told. The experience and the future make a heady present, as if one is leaping off of a bridge, hoping that when he hits bottom, he eases into the depths of happiness. It's a hell of a story. But there are no guarantees. So we soldier on. Or better yet, we Marine on.


The trailer for Bravo! Common Men, Uncommon Valor can be viewed here.
Posted by James Goertel at 4:44 PM