ALL 'LIT' UP AUTHOR ESSAY FEATURE with BETTY RODGERS (BRAVO!)

I say author essay because that's the feature... but, how do you define someone like Betty Rodgers under a one word moniker? You don't and you can't. First and foremost, she is a  filmmaker and an extraordinary one at that. Her passion for her documentary project "Bravo! Common Men, Uncommon Valor" is evidenced by the results her and her husband, author Ken Rodgers, have produced. The trailer alone is at once chilling, captivating, moving, and momentous. It is documentary film at its best. "Bravo!" is currently being prepped for the film festival circuit. Did I mention she's also a world class photographer? Then there's also her work producing and editing the Idaho Writers Update, which if you've been living under a rock, you might want to check out considering two of the country's up and coming writers, Alan Heathcock (VOLT) and Anthony Doerr (Memory Wall), are Boise residents. Well, as they like to say, there must be something in the water out there and I believe it's inspiration, determination, and pure talent. Betty Rodgers has obviously drunk deep and long from the those waters, for she has all three in spades. I am happy to have filmmaker, editor, writer, and photographer Betty Rodgers for this week's Author Essay Feature.
Enjoy - J. Goertel 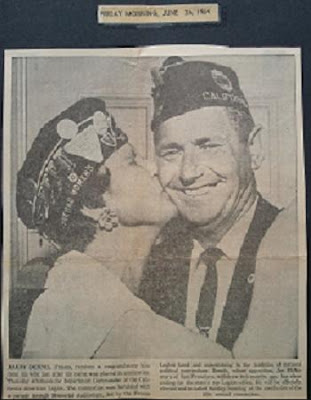 THE POWER OF ADORATION

A parent can set the tone for how we view individuals.  Mother helped me adore my Auntie Kay by making sure I knew how she had triumphed over the life-long effects of breaking her legs as a child.  (In the early 1900s she was confined in a cast and bed for weeks.) How brave she was for serving in New Guinea as a WAC officer during WWII.  Instead of pointing out any shortcomings, Mother taught me to see the worth in this tall, intelligent, attractive brunette. This woman whose long, graceful fingers nimbly played concert-level classical piano. This woman who frequently engaged in passionate conversation about the cosmos, politics, and philosophy.

And there was my Uncle Harry, Kay’s husband.  This easy-going, handsome, fun-loving man, known as the “Long Tall Texan” although he hailed from Oklahoma, was respected and admired for his strong work ethic, common sense, humor, and cooking skills.  He too served as an officer in the Pacific during WWII.  That’s where the two met and married.  Both of them returned home, raised fine sons, and gave themselves as advocates for male and female veterans through their affiliation with the American Legion.

Mother made certain we attended every special event involving my aunt and uncle, such as Harry’s installation as the California State Commander of the American Legion, Kay’s speeches championing better conditions at veterans’ hospitals and equal rights for female veterans.  In some way, I knew they were fighting for me, too.  Yes, I admired and adored them both.

As the years went by, this background of respect and honor for veterans stayed with me.  When Auntie Kay passed away, Mother helped sort her belongings and showed me her writings about World War II.  From her book, “New Guinea, A Magic Name and A Magic Isle,” some insight into my aunt’s experience upon arrival at the American cemetery in Sapuda:

“I can’t begin to describe the emotions that filled our hearts and eyes, and overflowed onto our cheeks, as we stood there.  We thought of the heartache of the parents and wives of these boys, we thought of the tragedy of their having to die so young, and we thought of the magnificence of their courage and the firmness of their faith and belief in what they were fighting for, in what they gave their lives for; the ones they loved, the flag they loved, the God they worshipped, in two words, THEIR AMERICA!  We swore that we would never betray that faith and belief, or betray their trust in us to preserve the things they loved and died for.”

And on anticipation of returning to American soil:

“We will have…the exaltation of having done our part in winning the greatest war of all times.  However, the greatest gift that we will take back with us is the knowledge of what war is, what it can do, and an appreciation of the great faith in America that inspired the magnificent courage in our boys.  We are determined that their sacrifice will never be repeated by their sons, that what they fought for will be preserved, it will never die or fade—THEIR AMERICA.”

As we know, there have been many wars since, and my cousins did serve during the Vietnam War.  My husband, Ken, also served.  He didn’t talk about it a lot after we met, but one of his best friends told me what a hero he was because of where he served and what he lived through.  I only knew that March 30, 1968, was a day that had imprinted his life forever, but I knew none of the details.

When we began to attend Khe Sanh Veteran reunions in recent years, I became keenly aware of the stories I heard and of what Ken had experienced, in part because of my aunt and uncle’s example.  Through them all…my aunt and uncle, my mother, my husband…I had learned to pay attention to the significance of history, service, and sacrifice.

This is what led me to a sense of urgency in recording the history of the men in Bravo Company, First Battalion, 26th Marines...the men with whom Ken served.  As they sat around the tables and reminisced, it reinforced what I instinctively knew…that theirs was also an incredible tale of courage and sacrifice for our country, and that we couldn’t afford to let the Khe Sanh veterans’ experience fade into oblivion. We needed to preserve it for their children and grandchildren, for American history, for mankind.

And so, that seed of adoration instilled in me by my mother, along with the men like Ken and his Bravo Company brothers who lived their story and were willing to tell it, have resulted in our new documentary film, “Bravo! Common Men, Uncommon Valor.”  After viewing the film, a common response is, “I care about these men…I love them.”  Now, after forty-four years, their story is told and their service acknowledged.  It is a testimony to the human spirit.  It is the direct result of the power of adoration.

An avid birder, Betty Rodgers is also a filmmaker and photographer living in Boise, ID, with her husband Ken. Her images are exhibited in homes, businesses, and private collections around the west. She also publishes the Idaho Writer's Update, the state's primary resource for literary information and events.  For recent news of Betty:  http://www.cowboypoetry.com/sincenews04.htm#bkr.