British author Imogen Robertson's meteoric rise since she won the Telegraph's 'First thousand words of a novel' competition in 2007 is nothing short of astonishing. Since then she has gone on to publish three bestselling novels - Instruments of Darkness, Anatomy of Murder, and her latest, Island of Bones. As Barry Forshaw of The Independent remarks in his review,"... what makes such books as Island of Bones so unusual is their audacious mix of a cultural gloss and uncomplicated, straight-ahead storytelling. The multi-layered nuance of Peter Ackroyd and the buttonholing narrative grasp of Stephen King are stirred into the mix." I feel privileged to have Imogen for this week's Author Essay Feature. ~ J. Goertel 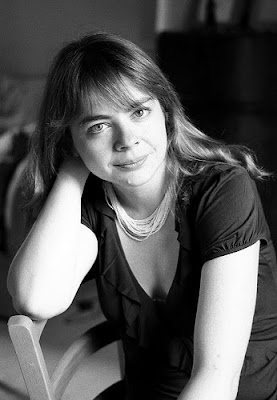 Imogen Robertson grew up in Darlington, studied Russian and German at Cambridge and now lives in London. She directed for film, TV and radio before becoming a full-time author. Imogen won the Telegraph’s ‘First thousand words of a novel’ competition in 2007 with the opening of Instruments of Darkness, her first novel. Her second novel featuring the detective duo of Harriet Westerman and Gabriel Crowther, Anatomy of Murder, was published in the USA by Pamala Dorman Books in February 2012, and the third in the series Island of Bones also comes out in the states later this year.

Any writer is a product of circumstance. Your family, your education, your relationships, your times; they all make you who you are, and therefore what you write and how you approach writing it. That said, sometimes you can look back and see a couple of key moments, key events, that turned you from a person who reads and likes the idea of writing into a working novelist. For me there were three and they involved a poem, a competition, and a group of talking numbers.

The poem first. It is The Mile High Club and was written by Neil Rollinson. He often writes graphically about sex, but he also writes tender, elegant, moving poems. When the poem was published in the Times Literary Supplement in 2001, I was blown away by it, but I lost my copy, snipped from the magazine while I was splitting up with my boyfriend, and dividing our possessions. Its loss haunted me and I began to look for it online. Using a few half-remembered lines I found Neil’s website, though not the poem, and emailed to ask if he was the author and if so where I could get the poem. He was friendly and flattered, and suggested a number of other modern poetry collections I might enjoy. (At that time Eliot was about the most modern poet I had read).

One thing lead to another. The poetry bug bit me hard and I started going to a workshop with the Scottish poet Roddy Lumsden in a strip lit classroom in North London. I still go every week. You might not think that a poetry class is the best way to learn to write Historical Crime Novels, but you’d be wrong. The crucial habits of attention to detail, of criticising one’s own work constructively, making each word count that I learn there have stood me in very good stead. The poets in the group are brilliant, smart and serious about craft. I honestly don’t think I would have ever had a novel published if I hadn’t spent that half an hour on the internet ten years ago trying to track down a poem that had moved me.

Now for the talking numbers. After graduation I worked for many years for a small but perfectly TV production company called Open Mind. I started by making the tea and ended up directing for them. They say never work with children or animals, but as it was a children’s TV company, I hardly did anything else. It’s tough to write prose when you come home every evening exhausted and covered in glitter, but when I became freelance I suddenly had time on my hands, years of training in story telling and the habit of hard work so I started to write the novel that became Instruments of Darkness. I got to about thirty thousand words then discovered they just weren’t that good. I’d have to start again. I sighed, very deeply, and put them in a drawer.

Then the talking numbers arrived. Open Mind were asked to produce a series called Numberjacks and asked me to direct half of the programmes of the first series. Now the only way to get me to save money is to make sure I am too busy to spend any. Directing a bunch of TV programmes that involve computer animation mixed with real world action on a tight budget and an even tighter schedule is a really, really good way of doing that. The bank balance started to look more healthy than it had done in years.

Bring on the competition. I had been swapping chunks of prose with two friends, both journalists, and while I was preparing scripts for filming and occasionally hallucinating numbers speaking to me, one of them, Rachel, emailed us to say had we spotted the ‘First thousand words of a novel’ competition in the Daily Telegraph. She thought we should make a pact to enter it. A thousand words isn’t much, about the length of this piece, so even while wondering about how to film a naughty spoon running away with someone’s shoes, I thought I could take the time to restart Instruments and enter the competition.

Do you see how it is coming together now? I sent off my entry and went back to filming confused looking children in the park. I was just stumbling towards the end of the project when I got the news that my entry was one of the five winners. There was some dancing round the living room table that day. Our prize was lunch with the judges, and a very nice lunch it was too at La Poule au Pot in Chelsea. At one point Louise Doughty, her book on how to write a novel is fantastic by the way, said: ‘Imogen, you’ll find that when you are a published novelist…’ I don’t think I even heard the rest of the sentence. That assumption she had just made; that I could do it, that I would have a book published suddenly made the idea of writing for a living seem, well, plausible. I decided not to look for any more work in TV and just write until the money ran out. It was not a sensible decision, and I would never have dared to do it if I had anyone financially dependent on me, but I saw the chance and took it. Four months later a friend from my poetry group recommended an agent who loved the book, and just at the moment I was loosing hope of getting a deal an editor at Headline read the novel, agreed with my agent and I was offered a two-book deal. My parents cried when I told them, and my best friend took me out to drink champagne by Tower Bridge on the Thames. Every time I walk along that stretch of river now I offer up my thanks to all my friends and family of course, but particularly to a poem, a competition and a bunch of animated numbers. 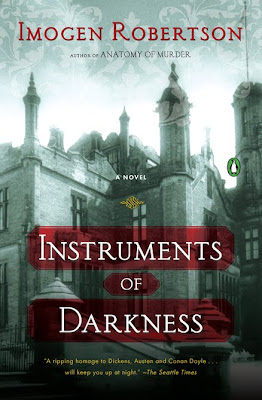 Instruments of Darkness by Imogen Robertson


For more information on Imogen Robertson and her work, feel free to visit here.
Posted by James Goertel at 5:57 AM